Asian hornets, wasps and even robber bees wanting to invade the hive find the front entrance guarded and opt for the undefended decoy side entrances. The hornets can smell the bees through the side entrances but when they enter they cannot reach them because of the wire mesh floor above them. The hornets are trapped and cannot exit because of the funnel design of the decoy entrances. They dehydrate and die and can be easily removed by the beekeeper.”

The trap, invented under the name of Apiburg® by Professor Michael Ifantidis in Greece, has been rigorously tested in France and Greece where hornets are already decimating honeybee colonies.
Although designed specifically to trap the Asian hornet, field trials have proved it to be very effective in catching other honeybee pests and predators including many wasps, wax moth and other types of hornet. Robber bees, often the cause of transmitting Varroa or other disease between hives, also get fooled into using the trap entrances

Have a look at the Video 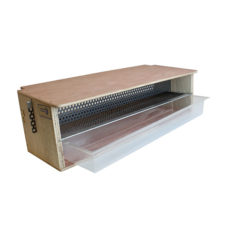